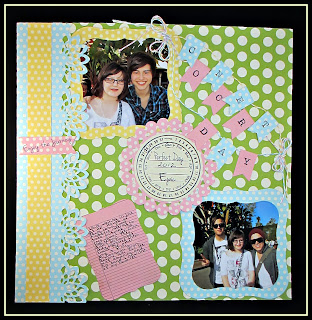 So, this reflects on January 28th, 2012. It was the day of the Allstar Weekend concert at the House Of Blues Anaheim in Anaheim, California. (Downtown Disney to be exact!) It was so much fun, and I am going to stop talking about it because I will get all into detail... or maybe I could explain :) I made a description for a youtube video about the concert, so I am going to copy and paste it and you will get the picture! If you don't wanna read about it, you can scroll down to the recipe!  I met Riley from Before You Exit, Pop! Fiction (which they were pretty cool! They went up to people in line and asked if they wanted to hear their music. I got a signed CD for $5) It was so cool! I also met Cameron Quiseng's dad, and Brent Schneiders' mom. She asked me my favorite guy, and I said "Zach." She must've told Zach's dad something cause he got up to go to the restroom or something and he smiled at me. It was so cool. We had seated tickets so that meant that we were up in the House Of Blues balcony. All the parents sat up their too! It was such an amazing experience. During Dance Forever, I was kind of dancing in an awkward way, and I think Zach looked right up at me! It was so amazing and I felt the connection when our eyes met... if that sounds corny or creepy/stalkerish, sorry. LOL. I wanted to meet them and Cam's Dad and Brent's Mom both said they would try to get me to meet them, but they were going to Long Beach Pier to film the lyric video for Wanna Dance With Somebody... so they didn't meet fans after the show. But I gave Cam's dad stuff to give the guys :) I was invited to Long Beach but we didn't rent a car. And I had to go to classes for CHA, and I was a little bit bummed, but it's ok!

The boy in the photo on the top is Riley McDonough, and the two guys in the picture below, is two guys from Pop! Fiction. They are good singers! (I saw a video of them singing Glad You Came by The Wanted! Good cover of a good song!)

You can get the links for the stamp sets on Friday!
God Bless,
Jillian
Posted by A Jillian Vance Design at 12:30 AM

Promote Your Page Too